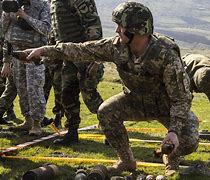 CAMP BONDSTEEL, Kosovo — There are memorable events in our nations history that spark a defining moment in some people’s lives where they decide to take on a life altering change. For Jack Frangiamore, a sergeant first class in the California National Guard, it was the U.S. military’s response during Desert Storm in 1990 and the L.A. riots two years later.

“I was proud of what we did during the war and it was an inspiration seeing the National Guard on the streets while I was driving home from teaching in Compton,” said Frangiamore. In February 1995, after weighing his options and paying off his student loans, the then 34-year-old high school math teacher decided it was time for a change.

“During [Advanced Individual Training] the war in Bosnia was going on and we were told we might be sent there,” Frangiamore said, remembering his time at Fort Jackson, S.C. However, the Springfield, Mass., native, who now belonged to the Division Support Command, 40th Infantry Division, based out of Long Beach, as a 25U, Communications Specialist, would watch as NATO helped end the war in Bosnia and Herzegovina (1992-1995) and some of his fellow ‘Golden State’ guardsmen were sent to help stabilize the region during Operation’s Joint Guard (1996-1998) and Joint Forge (1998-2004). Frangiamore would have to wait 14 years before setting foot on Balkan soil.

Then on Sept. 11, 2001, the entire world was shaken by the terrorist attacks on America and once again the National Guard was called up to respond. Thousands of National Guard and Reserve troops performed security missions on military installations, airports and other potential targets such as bridges during Operation Noble Eagle. Frangiamore was told to pack his duffle bags.

“I was a staff sergeant with Headquarters Battery, 1-144th Field Artillery, in Burbank, in 2003, when the entire unit was ordered to supplement the Edwards Air Force Base security forces for one year so they could deploy to Iraq,” said the Bellflower high school teacher. Married now, having met his wife Laura and her son Chris in 2002, the time away from his new family was tough but he managed it all with a cool calculating approach and lots of patience only a math teacher who has dealt with thousands of teenagers could.

After completing Advanced Non-Commissioned Officer Course that same patience paid off as Frangiamore was promoted to his current rank of sergeant first class in July 2004.

His life changed again during a drill in January 2008 with his current unit, Headquarters Co., 40th Infantry Division, in Los Alamitos, when his leadership planted the rumor that he might be deployed to Kosovo. It took nine more months of speculation till someone told him he was on the list to go with the Liaison Monitoring Team, a hybrid company specially created for the mission in Kosovo and part of the Multi-National Task Force-East organization, maintaining a safe and secure environment in that region.

“I didn’t even know what the LMT was. I thought it was one of those LMTV units,” said Frangiamore jokingly. Once again the soft-spoken teacher, used to solving problems, was facing the unknown. He was joining a unit that didn’t exist yet and going overseas, something the 47-year-old had never before.

Nine more months has passed and Frangiamore is sitting in the Office of Emergency Preparedness, speaking with an Albanian, Afet Hasani, the director for the municipality of Strpce/Shterpce, a town with an ethnic Serbian majority in southern Kosovo. The town and its surrounding villages has become a hotbed of tension in the past few weeks because their power has been turned off by KEK due to some residents not paying their bills. During the hot summer month of July perishable goods such as food and medicine have suffered. So have the town’s businesses whose owner’s are trying to build up this region’s economy and infrastructure. The residents don’t like what is happening and hundreds have already voiced their disdain during a demonstration, some answering a ringing of the town’s church bell to gather and protest, according to his team. Frangiamore and his squad are just trying to make sure it stays peaceful but productive.

“We are talking to Mr. Hasani to make sure that he is ready in case things get out of hand. We talked about the possibility of a riot and how the firehouse and Kosovo Police would respond. We try to learn as much as we can so we can find out what is going to happen before it happens,” said Frangiamore, who has a Clint Eastwood-style raspy voice. His team is assigned to the Strpce municipality, a nature rich valley with a population of approximately 14,000, according to a 2001 census by OSCE. The MNTF-E participating nation of Ukraine has a camp there, Camp Breza, in the ski resort village of Brezovica, where some of the team works out of. His team, known as LMT 7, has learned a lot since arriving at their 9-month duty station, Camp Bondsteel (CBS), in February 2009.

“The people here like to talk, sometimes personal before business and what they want the most is someone to listen.” Frangiamore’s years as a teacher serve him well as he has become a great listener through effective use of the LMT assigned interpreters, which he considers the best in the task force.

LMT 7 on paper looks like a hodgepodge of soldiers coming from different units, nations and skill sets that have no rhyme or reason to be put together to handle a highly political and culturally sensitive situation but in actuality all the LMT’s were carefully constructed, sometimes hand-picked and blend perfectly well with the environment they are working in, according to his officer-in-charge, 1st Lt. Chiddy Adighije.

“I didn’t know my team until we started training together. I have an officer who is Signal Corps, two sergeants, one paralegal and the other qualified in medical logistics, a corporal who is a combat engineer, a supply specialist who speaks fluent Russian and another one who is a trained imagery analyst,” said Frangiamore, who also said his team works closely with two Polish and two Ukrainian officers, who are part of the MNTF-E mission.

“During training it was easier to manage the troops because things were set in a training plan. Now we are moving with the tide, which is changing day-to-day, hour-to-hour. We have to be flexible. Things happen at the last minute and we need to scramble and probe for new information that just popped up because the LMT is the eyes and ears of the [commanding general] of the task force. We need to make sure he isn’t caught off-guard,” said Frangiamore, who says this makes team management interesting but goes about his tasks with a cool, level-headed, meticulous approach.

After meeting with Hasani, Frangiamore hears about another possible demonstration and takes his team to an outpatient clinic to check on their power and supplies. He teaches his troops how to sense the populace, which requires patience and a constant revolving door of observing, collecting, updating and reporting. He has nothing to go off of, no manual or standard operating procedure to check to make sure they are doing all this correctly.

Unfortunately this situation wasn’t used as a scenario to teach the LMT’s what to expect during their mobilization training at Camp Roberts, Calif., Camp Atterbury, Ind., or Camp Albertshof in Hohenfels, Germany. Frangiamore has been adjusting on the fly and knows what his role is as the team’s senior NCO. It falls right in line with the NCO Creed.

I will communicate consistently with my soldiers and never leave them uninformed. Officers of my unit will have maximum time to accomplish their duties; they will not have to accomplish mine.

“I view my role as the first sergeant of the team because my sergeants are the ones who are on the road the most with the junior troops,” said Frangiamore, who says he spends most of his time in his office at CBS handling reports and visits Strpce once a week, “I get the plan from, my [officer-in-charge] and execute it. I try to organize everything, making sure my troops are at the right place, right time and have the right equipment and information to get the job done. I brief the team the night before and conduct [inspections] prior to them leaving the camp in the morning,” said Frangiamore.

“Our biggest challenge is personnel. We are stretched pretty thin.” Two of his teammates don’t live on CBS, they stay at Camp Breza, a few hours away. This presents logistical concerns but at the same time is very effect because their team is a permanent fixture within the Strpce community and can sense the shifting patterns of any ethnic tension.

“It has been interesting [looking after troops] because spending everyday for a year with someone is stressful. It requires a lot of patience,” said Frangiamore, who likes to go on long runs to think. The wiry 48-year-old, who far exceeds the maximum score on the Army Physical Fitness Test, says his first sergeant and fellow senior NCOs meet once a week to trade lessons learned, find solutions, offer each other advice and it keeps him sane.

“I didn’t know what I’d be facing on this mission. It is definitely not typical. I’ve learned a lot of what it means to be an NCO because of this mission and the mentorship of my first sergeant,” said Frangiamore as he waits at the location of where the demonstration is supposed to occur. “Prior to this I hadn’t had any high stress positions [in the military]; it is hard to one weekend a month.”

“I’ve learned to care about my Soldiers without caring what they think about me, which means sometimes you have to kick them in the butt and sometimes you have to pat them on the back. I’m still learning when to do that but it might have taken me many years to learn if I didn’t come here,” said Frangiamore.

An hour goes by in the sweltering heat and nothing happens. He gets a call from his OIC that there won’t be a demonstration today.

“After eighteen years teaching math I have lots of patience. It has increased two hundred fold from when we arrived here,” said Frangiamore, as he rides back into town to find out what happened. You can tell his mind is already formulating what the cause and effect were, the revolving door process beginning all over again.

Gemini is launching credit with bitcoin