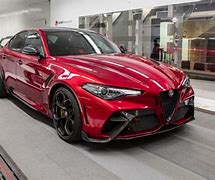 First it was a house, now it’s a car.

Alfa Romeo’s new plug-in hybrid SUV, the Tonale, will come with a complimentary non-fungible token (NFT) when it arrives in 2023.

At the global reveal on Tuesday, the cryptocurrency feature was announced. Each purchase will be linked to a digital certificate (that’s what an NFT is, essentially) that will continuously update with information about the car. Alfa Romeo says that this record will keep track of maintenance and milestones (like when you hit 100,000 miles) and provide extra data and a well-documented history if you ever sell your Tonale.

NFTs are stored in a digital wallet with other cryptocurrencies (think of the NFT as a digital baseball card or other collectible), but Alfa Romeo didn’t mention which blockchain it will be based on. Most NFTs run on Ethereum, a blockchain platform like Bitcoin, that records all data digitally. In theory, you could trade or sell your Tonale NFT on its own, but it likely won’t have much value without the car itself.

The NFT will track data only if the owner agrees to share that information, and at this point, it feels a bit more like a gimmick than a valuable feature. Alfa Romeo reps said they’d have more details closer to launch.

Otherwise, the car is, well, a car. The 15.5 kWh battery has 30 miles of pure electric range combined with a four-cylinder engine. There’s a 10.25 inch center touchscreen that can connect wirelessly to Apple CarPlay or Android Auto.

The Italian carmaker claims it’s the first to attach blockchain technology to a vehicle purchase, for whatever that’s worth.

Pricing wasn’t immediately available, but reports have surfaced indicating that the Tonale will start just under $40,000 for the base trim level.

Playboy to build in metaverse

Can you sell crypto for cash

It fair shot in crypto payments