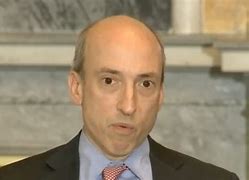 Gary Gensler was sworn into office today as a Member of the Securities and Exchange Commission by U.S. Senator Ben Cardin. He was nominated to Chair the SEC by President Joseph R. Biden on February 3, 2021 and confirmed by the U.S. Senate on April 14, 2021.

“I feel incredibly privileged to join the SEC’s team of remarkable public servants,” Gensler said. “As Chair, every day I will be animated by our mission: protecting investors, facilitating capital formation, and promoting fair, orderly, and efficient markets. It is that mission that has helped make American capital markets the most robust in the world.”

“I’m honored that President Biden nominated me, and I’m grateful to Vice President Harris and the Senate for their support,” Gensler added. “I’d like to thank Acting Chair Allison Herren Lee for her leadership the last few months and all of my fellow Commissioners for being so generous with their time and advice.”

Before joining the SEC, Gensler was most recently Professor of the Practice of Global Economics and Management at the MIT Sloan School of Management, Co-Director of MIT’s [email protected], and Senior Advisor to the MIT Media Lab Digital Currency Initiative. From 2017-2019, he served as chair of the Maryland Financial Consumer Protection Commission.

Gensler was formerly chair of the U.S. Commodity Futures Trading Commission, leading the Obama Administration’s reform of the $400 trillion swaps market. He also was Senior Advisor to U.S. Senator Paul Sarbanes in writing the Sarbanes-Oxley Act (2002) and was Under Secretary of the Treasury for Domestic Finance and Assistant Secretary of the Treasury from 1997-2001. In recognition for his service, he was awarded Treasury’s highest honor, the Alexander Hamilton Award. He is a recipient of the 2014 Frankel Fiduciary Prize.

Prior to his public service, Gensler worked at Goldman Sachs, where he became a partner in the Mergers & Acquisition department, headed the firm’s Media Group, led fixed income & currency trading in Asia, and was co-head of Finance, responsible for the firm’s worldwide Controllers and Treasury efforts.

A native of Baltimore, Maryland, Gensler earned his undergraduate degree in economics in 1978 and his MBA from The Wharton School, University of Pennsylvania, in 1979. He has three daughters.