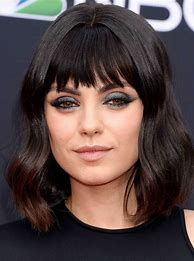 Before getting to the Q&A portion of this post, there are Twelve Things you should know in advance about starlet/actress/voice actor MILA MARKOVNA KUNIS. In no particular order:

1. She is quick. A verbal Federer, she often anticipates with leonine speed what direction you’re heading in conversation. 2. She is, in fact, a Leo, she says (like her mom). So all leonine allusions indeed seem apt.

3. She comes from science-minded stock — her folks are Ukrainian emigres who know their advanced physics and engineering. 4. She herself speaks Russian. And quickly. (We can only imagine how she plays World of Warcraft.) 5. She says she did pretty well in physics, but she still does not quite trust the science of aeronautics. 6. And yet somehow, she has a keen ability to make a career soar. 7. She is a longtime fan of her “Extract” director, Mike Judge, who himself has an understanding of advanced physics and engineering. 8. She calls her longtime partner Macaulay Culkin simply “Mac” in interviews. It is endearing. 9. At Comic-Con, she proved she can deftly defuse a young fanboy’s naive sexism while still letting him retain his dignity. 10. She has one of the great full laughs in show business. 11. Fortunately for her, crack comic acting is largely about smarts. And quick reactiveness. And the physics of the thing. And often, maintaining the dignity of your character, even when she’s a fool. 12. Having a great full laugh in your actor’s toolkit never hurts, either.

Comic Riffs recently caught up with Kunis, who’s quite busy in the past coupla years. When not starring opposite Jason Segel (“Forgetting Sarah Marshall”) or Jason Bateman (“Extract,” opening today) or Denzel Washington (the upcoming “The Book of Eli”), the former “That ’70s Show” actress can be heard voicing Meg on Fox’s “Family Guy.” Here are her replies, but quickly:

MICHAEL CAVNA:Do you have to be smart to do comedy — at least comedy that’s verbal, not just slapstick? In other words, to use a favorite Mike Judge term, can you do comedy and be a dumb[body-part]?

MILA KUNIS: I don’t think you can [be dumb]. I think to play a dumb[body part] can be one of the hardest things to play. At least to play and not just look silly.

MC:So how did you become involved with “Extract”? Were you drawn to it because it’s a Mike Judge project?

MK: I’ve been a fan of his for a long time. When I found out Mike Judge wrote [“Extract”], I said: “Sign me up.” I read the script while I was shooting ‘Max Payne.” [Judge] and I have very similar senses of humor — very dry.

MC:Speaking of “Max Payne,” you’ve really been genre-jumping lately — from action to comedy to drama. Is that your present career plan, or just a function of the best projects you’ve been offered?

MK: I think it’s fun to do different genres. It’s easy to stay busy if you’re stuck in one genre, but I’ve been really lucky, going from comedy to drama to suspense thriller.

MC:How do you approach a role?

MK: I take the character and [study] to do the role. I don’t live the character. When you finish a hard day, you have a tendency to take the work home anyway, though.

MC:So with a comedy like “Extract,” did you improvise much on set?

MK: Some, but when a script is as great as this, sometimes you just do it. What makes Mike great is that he’s not married to the dialogue. He’s one of those [filmmakers] who doesn’t make you feel as if you have to do their version. He hires people that he trusts and lets you take the rein. You collaborate — he gives you the right and guides you throughout. He’s one of a kind.

MC:Jason also joked about your not getting any scenes with [co-star] Kristen Wiig? That Kristen said you’re too pretty to be onscreen with.

MK: That’s crazy. We’ve been in three movies together and I’ve never had a scene with her!

MC:So you’ve now worked with two of the top animators in Fox TV history. What’s it like to work with [“Family Guy” creator] Seth McFarlane?

MK: Oh, Seth is great. He’s brilliant, and we’ve been friends for a long time.

MC:And going into this, what was your favorite Mike Judge work?

MK: I think “Office Space.” It gets better the more you watch it.